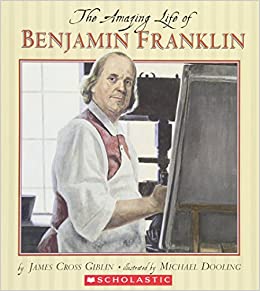 The Amazing Life of Benjamin Franklin

Now available in paperback for the first time, James Cross Giblin and Michael Dooling tell the story of the man known as the "wisest American."

Benjamin Franklin was one of seventeen children, and the youngest of 10 sons. To help out with the family, he was put to work when he was 10 years old in his father's candle and soap-making shop. Ben hated making soap and candles. Since he was smart and a good speller and he loved to read, he later went to work in his brother's print shop as an apprentice. He read book after book, and soon began to write himself. By 18, he moved to Philadelphia where he eventually openend his own print shop. By age 28 he published "Poor Richard's Almanac," a best seller in Colonial America.